By wharperFebruary 7, 2021Uncategorized
No Comments

We have now concluded week three of the legislative session. Week three included additional time for floor debate each day, requests for appropriations presentations each morning and standing committee meetings each afternoon. We have passed 50 bills so far, and we still have hundreds more to consider. As always, you can tune in for any of our committee meetings or floor debate on le.utah.gov.

An Update on My Bills – There are many issues you ask me to address in the Legislature. Some require statutory changes. Here are the bill numbers and summaries of proposed law fixes per your requests.

S.B. 14, Driver License and State Identification Card Amendments– This allows an individual who is ready to relinquish their driving permissions to receive an identification card free of cost. This bill passed with unanimous support in both the House and Senate.

S.B. 18, Property Tax Exemption Amendments– Everyone has been impacted by COVID-19. In an effort to minimize economic damage from business closures, lots of money has been invested by city, state and federal governments. This bill tries to help keep businesses afloat by removing personal property tax for over 39,000 businesses. This is tax relief for our struggling local, small businesses and a tax cut. This bill passed committee and will be voted on by the Senate soon.

S.B. 63 Caregiver Compensation Amendments– This bill directs the Department of Health to apply for an amendment to an existing federal waiver to the state Medicaid plan that would allow a spouse who acts as a caregiver, to receive reimbursement for their services that would otherwise be contracted out. This bill passed in the Senate with unanimous support.

S.B. 79 Insurance Policy Notification Amendments– Last year there was a change to the notification process to lapsed insurance policies. A couple of constituents notified me that there were additional problems that were not resolved with the changes. This bill allows individuals to designate a third party to receive a notice of lapse or cancellation of the policy, based on nonpayment of premium, by certified mail.  This bill passed committee and is waiting for a Senate vote.

S.B. 100 Taxpayer Tax Credit Modifications– In Utah, our tax code is linked with the federal tax code. In 2017, when the federal government passed the Job Creation and Tax Cut Act,, the dependent tax credit was eliminated. We are a family-centered state and so this tax credit is particularly important to many Utahns. This bill restores most of the dependent credits and is a more than $40 million tax cut for families in Utah. This bill passed committee and will be voted on by the Senate soon.

S.B. 101 Motor Vehicle Amendments– This bill removes two-way radio devices from prohibited communication devices while operating a moving motor vehicle. As such, individuals using these devices, such as police officers and bus drivers, while driving, will not be subject to penalties associated with their use. This bill passed the Senate and will be heard in House committee soon.

S.B. 131 Public Education Building Standards and Process– This bill enhances an existing requirement in state code for school buildings to improve transparency, accountability and information to the public regarding when school buildings will be built and for what cost. This bill passed committee and will be voted on by the Senate soon.

S.B. 149 Massage Therapy Practice Act Amendments– This bill simply exempts a brain integration practitioner from having to be licensed.  This bill is awaiting a committee hearing.

S.B. 162 Education Expenses Tax Credit During Public Health Emergency – This bill adds a nonrefundable individual income tax credit that can be claimed for a dependent’s education expenses incurred as a result of a change in school enrollment or instruction caused by a public health emergency.  This bill is awaiting a committee hearing.

I am happy to run these bills that will help make a real difference to constituents in our district! 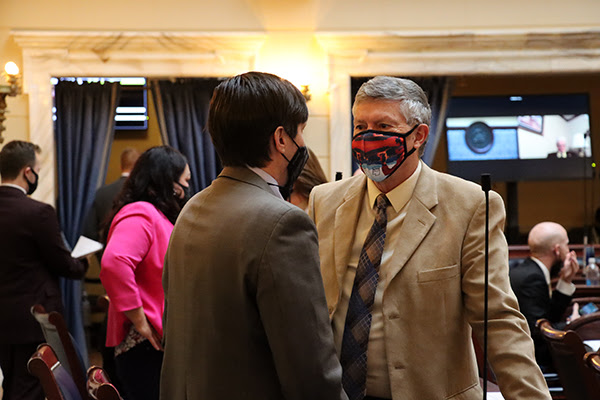 Utah currently has an “open carry” law that allows citizens who are legally able to possess a firearm to openly carry them in public. Once that individual puts on a coat over the weapon, it is considered a concealed, which currently requires a permit. H.B.60 Conceal Carry Firearms Amendments, would allow anyone over 21 that is legally able to possess a firearm to carry a concealed weapon in public without a permit. This does not change our gun ownership laws. This simply allows law-abiding citizens to conceal their firearms on their person in public areas.

The bill also establishes the Suicide Prevention and Education Fund where expenses from the state’s concealed weapons account will go towards suicide prevention efforts and firearm safety. This does not discontinue the permit process, as those who choose to conceal carry while visiting other states will still need a permit. H.B. 60 passed in the Senate and will return to the House for concurrence.

You can watch the Senate floor debate here.

In Utah we work hard to provide free and fair elections. While Utah does a better job than most states on elections, there is always room for improvement. H.B. 12, Deceased Voter Amendments creates a more uniform process to remove deceased persons from the voter rolls. When a Utahn passes away, this bill requires that the death certificate be sent from the state registrar to the Lieutenant Governor’s office within 5 business days of receipt. The certificate will then be sent to the County Clerk’s office where the deceased person’s name will be removed from the voter rolls. Before each election cycle, the Lieutenant Governor’s office will also cross-check each name against United States Social Security Administration data. H.B. 12 passed in the House and passed its second reading in the Senate.

To watch the bill presentation on the Senate floor, click here.

This tamper-proof technology will allow firearms to record the number of shots fired and when they were fired. This simple modification will improve the effectiveness of police investigations where firearms were used. This bill passed in the Senate and will now be considered in the House. Listen to the bill’s presentation on the Senate floor here.

This week we considered legislation that would make changes to the driver license requirements for new drivers. H.B. 18 Driver Education Amendments, would extend the term of a learner permit from one year to 18 months, meaning the permit would not expire until the 18-month mark. This change would not prevent youth from getting their license upon turning 16. In addition, this bill would remove the required 6 observation hours for 15-17 year olds as they have already been observing driving their entire lives. This bill passed with unanimous support in the Senate.

To listen to the bill presentation on the Senate floor, click here.

Many of us learned about the Holocaust during our K-12 years; however, over time it seems this important, historic lesson is being increasing left out of our children’s education. S.C.R. 1 Concurrent Resolution on Holocaust Education, highlights the importance of Holocaust and genocide education for students, schools and communities and encourage the State Board of Education and local education agencies to provide Holocaust and genocide education.  This bill passed with unanimous support in the Senate and will now be considered by the House.

You can watch the bill presentation on the Senate floor, here.

Over the last year we have made many efforts to get economic support to businesses negatively impacted by COVID-19. S.B. 25 Corporate Tax Amendments, provides more targeted relief to businesses that were negatively impacted by COVID-19 by allowing them to carry back, for up to three years, a Utah net loss realized during 2020. The idea is if a business was profitable in the three years leading up to 2020, but then suffered a loss in 2020, that is very likely due to the economic hardship brought about by the pandemic. This bill passed in the Senate and will now be considered in the House.

You can watch the bill presentation on the Senate floor, here. 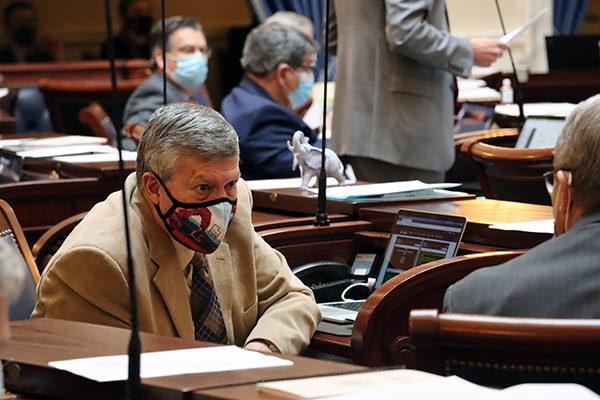 In my 2021 Legislative Session survey I asked you to rank the most important budget priorities. 30% said public education was the most important issue followed by increasing our raining day account (saving for an economic downturn) and third was investing in infrastructure.